Gary Kraftsow has been a pioneer in the transmission of yoga for health, healing and personal transformation for 30 years. He began his study of yoga in India with T.K.V. Desikachar in 1974. He is a renowned speaker and teacher of the Viniyoga methodology at many conferences and schools, nationally and internationally. In 1999 he founded the American Viniyoga Institute, LLC. Gary has successfully developed protocol for two National Institutes of Health studies: “Evaluating Yoga for Chronic Low Back Pain” and “Yoga Therapy for Generalized Anxiety.” He is the Director and Senior Teacher of the American Viniyoga Institute, author of two books published by Penguin: Yoga for Wellness and Yoga for Transformation as well as author of four educational DVD’s: “Yoga Therapy for Low Back, Sacrum and Hips”, “Yoga Therapy for Upper Back, Neck and Shoulders”, “Yoga Therapy for Depression” and “Yoga Therapy for Anxiety”. 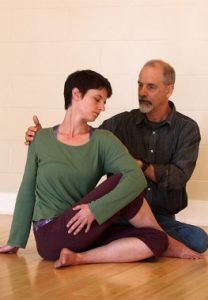 “Gary Kraftsow is a living yoga master. His depth and breadth of knowledge of yoga is vast, as is his experience as a practitioner and teacher for almost forty years. Learning from him is truly an enlightening and educational experience. I met Gary at Himalayan Institute about ten years ago and I still practice and teach techniques I learned from him then. Every time I study with Gary, I feel elevated as a practitioner and empowered as a teacher. Studying with Gary Kraftsow is mandatory for students seeking authentic yoga.” – Mia Park, Moksha Yoga Teacher

2 - 5pm
Yoga for Relationships, Intensive
The Ancients explored the mysteries of Reality: especially the nature of the Divine, of human consciousness, of the material world, and the complex inter-relationships between these three aspects of Reality. They understood our true nature to be Consciousness living in a multidimensional relationship with our mind, our body, our society, the physical world around us, the greater Cosmic Universe we find ourselves in, and the greater Mystery of Life itself. They transmitted teachings and practices on how to refine these relationships, eliminate sources of suffering, and realize and actualize our highest potential. In this intensive, we will begin to explore the breadth of these teachings and practices, and how to integrate them into our own personal practice as well as into our teaching. In the weekend workshop that follows, we will dive even deeper so that the participants will have a direct experience of the truly integrated science of Yoga.

6:30 - 9pm
Yoga for Life, Exploring an Integrated Practice
Are you living for your yoga practice, or using your yoga practice to help you live your life? Join Gary Kraftsow, Founder & Director of the American Viniyoga Institute, to explore specific Yogic teachings and practices that provide methods to help us achieve our highest potential. Through lecture and practice, you will learn how to move towards optimum health by adapting yoga practices to individualize and actualize your process of self-discovery and personal transformation.

10am - 12:30pm
Yoga for Life, Asana: Cultivating a Conscious Relationship with Your Spine
Focusing on the spine, we’ll consider what is essential for creating and maintaining a healthy and integrated structure. Then we’ll explore how to use breath-centric asana as a functional tool to help you move through life with stability and ease. Practice includes breath-centric asana.

2:30 - 5pm
Yoga for Life, Pranayama: Cultivating a Conscious Relationship with Your Autonomic Nervous System
Do you ever find yourself fluctuating between fatigue and stress? Would you like to understand how to use your practice to manage your energy? Focusing on the autonomic nervous system, we’ll consider how to create and maintain balanced energy throughout the day. Then we’ll explore how to use breath-centric asana and pranayama, as functional tools to help you move through life with vitality and relaxation. Practice includes breath-centric asana and pranayama.

10am - 12:30pm
Yoga for Life, Meditation: Cultivating a Conscious Relationship with your Mind
Do you have clarity about who you are and where you are going? Would you like to deepen your self-understanding and create a life guided by your values and priorities? Focusing on the mind, we’ll explore issues like choices and life orientation. Then we’ll explore meditation as a functional tool to help you set a direction for your future, and move through life with purpose and grace. Practice will include breath-centric asana, pranayama, and meditation.

2:30 - 5pm
Yoga for Life, Tantra & Samadhi: Cultivating a Conscious Relationship with Your Heart
Do you recognize that your thoughts, emotions, and behavior mutually influence each other, are provoked by your conditioning, and form the basis of your personality? Would you like to overcome troubling emotions and experience more happiness and love in your life? Come explore Tantric practices as a functional tool to help transform dysfunctional patterns of thought, mood, and behavior and actualize your highest potential. Practice will include breath-centric asana, pranayama, meditation, mantra, and chakra sadhana.